The entire attack on LAW ENFORCEMENT by the Left is "the way they do business" today in America.  Humiliate Law Enforcement, encourage the lawlessness against Law Enforcement and the elimination or non-cooperation with Government Agencies such as I.C.E. to fight crime.  THIS IS THE NEW DEMOCRATIC PARTY!  The leadership has given approval through lack of action and stopping the radical arm of their party.

To put it bluntly, Nancy, Gottheimer, and Schumer can sit back and watch A.O.C. and the "Squad" of Haters - do the "Dirty Work" and then say - "It's Not Democrats who are doing anything.  This is all because of President Trump and the Right Wing of the Republican Party." While they ignore the burning I.C.E. offices!  It's shameful and pathetic and NOT the way RESPONSIBLE American's Political Leaders should behave.

Notice how President Trump and Republicans get blamed for violence at the drop of a hat. It's so bad that if a five year old flings broccoli, it's Trump's or Republicans who are at fault. We encouraged it.

Now, Far Leftist Hard Liners are bombing I.C.E. offices, harassing children and families of Agents and threatening more violence. Bullet's, Molotov Cocktail's connected to Manifestos directed against conservatives, law enforcement and our President are evidence of far left extremism - and yet, our President and fellow Republicans get solely blamed for Violence.

Typical of the left in groups such as ANTIFA, they act Violent and then blame Republicans, and ESPECIALLY PRESIDENT TRUMP for the Violence.  Another tactic is to say that ANTIFA and these violent factions aren't associated with the Democratic Party.

Nearly all the current candidates for President on the Democratic Party are calling for the elimination of I.C.E. They BLAME I.C.E. and the President for made up lies about the holding facilities on the border, the way that illegals are treated and the conditions on the border. 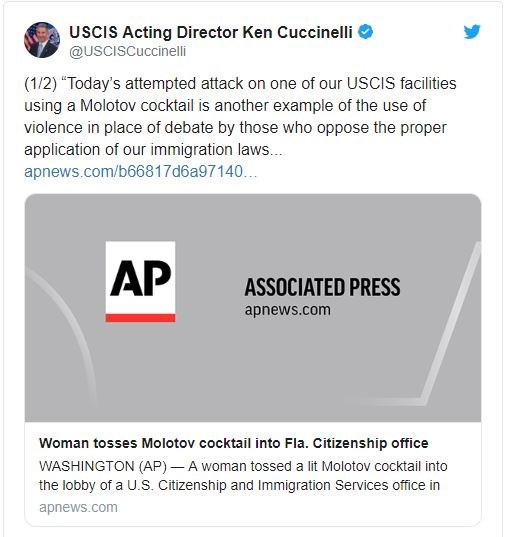