Last night was a proud night for Sussex County.  We should be proud of our Freeholders.  As I stated last night these brave souls are taking on the might of the State of New Jersey that is breaking Federal Law.  It is an American Tradition to question your government.  In this case, our State Government is BREAKING THE LAW with it's UnConstitutional Sanctuary State Prohibitions towards Law Enforcement and Immigration Law.

The Democrats in the audience attempted to shut down the debate with their pushing and shoving (I and several other members of the public were shoved by the Chairwoman of the Democrat Party of Sussex County as she stormed out of the meeting!) and their shouting down the Freeholders and public at large.  At one point a member of the Democrat team complained about the fire exit being blocked - SHE WAS STANDING in the Walkway to the door - as the blocker!  If you look at her video, you will see from her angle that she was (She did a "live event")

They did this, I believe, because they knew they had 0 chance of convincing the stalwart Freeholders from caving.  Their answer was to delay, delay, delay and hope to de-legitimize the meeting, thus making the passage null and void!

This didn't happen.  Instead, the Freeholder Board made a stand.  The vote was 4-0 in favor of passage.

There were several powerful remarks made by the Freeholders (Forthcoming) that made the point clearly.  That responsible members of the government need to stand up against this.  And they Did!  It was a full house.

CAN ANYONE SAY RECALL! 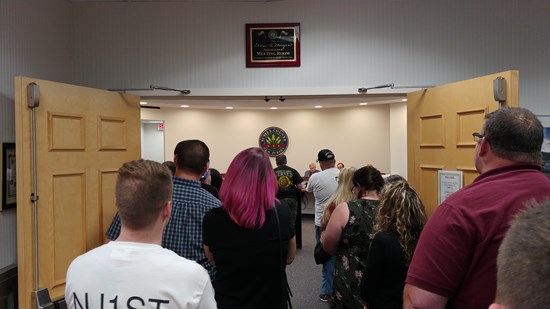